The Integral Theory is – next to Value Systems and Change Dynamics – the third fundamental pillar of Spiral Dynamics Integral. The SDi body of though assumes that all aspects in our live and work environment have an inner dimension (subjective values and motives) and an outer dimension (objectively measurable behavior and manifestations) on both the individual and the collective level.
When we study the reality from these four dimensions, is becomes clear that development is an integral and coherent whole. In a way, the Integral Theory creates a map, which shows us where an individual or organization is ‘situated’ on the spiral. It then tells us which aspects they want to give attention to now or later. The Integral Theory teaches us that organizational development is always connected to personal and interhuman development and that growth and change of both an individual and an organization is in constant interplay with the environment. A big advantage of the Integral Theory is that it is structured, pragmatic and easy to explain. You can find more information below. 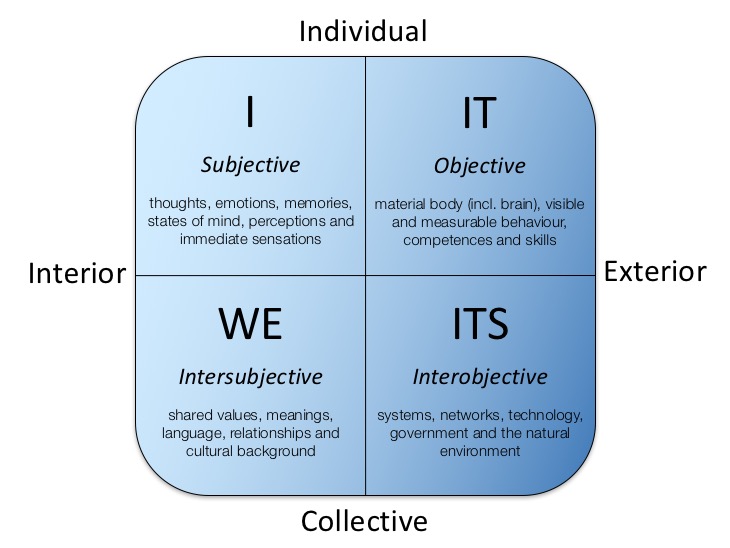 Introduction to the Integral Theory
The Integral Theory is a comprehensive theory designed by the American philosopher Ken Wilber and which is based on the elementary insights of several major philosophical traditions in the world. The basic framework for the Integral Theory is the Four Quadrant model, or AQAL (an acronym for All Quadrants, All Levels) (see image above). The model describes that we can look at our reality through an individual, a collective, a subjective and/or through an objective lens. These four quadrants all reflect reality in their own unique and valuable way. What is very powerful about the model is that all quadrants must be considered and studied in order to have a complete view on reality.  When we consider the reality from just one quadrant, our view will be incomplete. Often, an issue or a problem in one quadrant is a result or reason of a problem or solution in another quadrant, which had not been considered until that moment.  It is valuable to understand that all quadrants are equally important to fully grasp change and development processes and implement appropriate interventions to reach the desired outcomes. The Integral Theory shows us maps of which aspects are given attention to and which are not within an individual and an organization. It clarifies why things can only be successful when everything and everyone is included.

Application of the Integral Theory; an example
For example, the management of an IT organization wants employers of a certain department to work more competence-driven and show more entrepreneurship. These competences, which are related to the more Orange Value system, fit the quadrant in the top right hand corner in the model (individual-objective). To realize this change, we need to explore if the desired behavioral variables match with the current motives of these employees (quadrant bottom left: collective-subjective). In the case of little to no employees with Orange Value Systems, this may turn into a very difficult process. Firstly, the Orange Value System needs to be activated in these employees. And when, for example, a dominant Purple group culture is active (quadrant bottom left: collective-subjective) and the organizational procedures are mainly organized based on a Blue Value System (quadrant bottom right: collective-objective), a relatively simply change can be challenging. Why? In the practical application, this change to Orange will have many effects in one single quadrant because of the changes in the other quadrants.

People develop step-by-step (in stages) from one level of development into the next level of development. These levels of consciousness are permanent. Once you master a level, for example reading and writing, it’s, under normal consequences, a permanent change. In combination with value systems, this development shows itself as the consciousness of a certain value system. For example, when a person, because of changing life conditions and after an experience of disharmony, adapts from a dominant Orange value system to a dominant Green value system as his or her primary worldview.

Lines refer to the different variety of intelligences people have developed, for example cognitive, emotional, spiritual, physical, relational and moral intelligences, etc. For example, some people are highly developed in logical thinking, but poorly developed in dealing with their emotions and expressing them. In some value systems, a preference for some lines will emerge. All lines are essential in all value systems. However, depending on the context, the value system will choose certain lines above other lines in order to consider the adaptation successful or not.

Types are certain characteristics linked to a personality, an organization or a society. Mostly, they will remain the same in different stages of development. For example, the differences between feminine and masculine, Enneagram Personality Types, and Jungian Archetypes, and I -vs. – We cultures. Types are completely static and they can – if necessary – develop in a “healthier” manifestation tailored to changing an/or new life conditions.